9000SC is now available in a night vision compatible version! 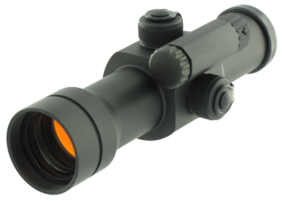 Aimpoint, the originator and worldwide leader in electronic red dot sighting technology, has announced the addition of a 9000 series sight to the company’s product line. The new 9000SC-NV is available immediately to the countries where hunting with night vision equipment is allowed.

Ever since their introduction in 2005, market response to Aimpoint’s 9000 series sights has been very strong, with wide acceptance by the hunting and sport shooting communities. The 9000SC’s combination of a high quality optic at an affordable price has kept this sight in high demand.
During a product review session involving experienced users, it was determined that a hunting sight with night vision compatibility was desired. As a result, Aimpoint is proud to announce that the 9000SC-NV red dot has been added to the 9000 series of sights.